We live near the headwaters of the north fork of the Milk River, which starts in Montana, makes a loop up through southern Alberta, then drops south again to dump into the Missouri River out near Fort Peck Reservoir. To say that the water rights on the Milk are a bit of an international hot button would be a vast understatement. It's northward path out of the U.S. is marked by a long, high ridge which makes up most of the Canadian scenery that's visible from our ranch. The ridge runs unbroken for miles, except for small, rugged draws and what is known as Whiskey Gap. 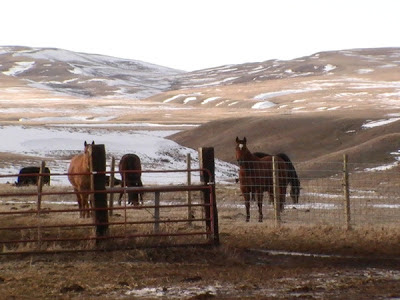 The gap gets its name from the whiskey that flowed through it and across the border during Prohibition. This was not just north to south as some might assume. Alberta had a prohibition period from 1914-1916, during which the whiskey rumbled north via wagons that traveled through the Gap. Even today the towns of southern Alberta directly north of us are all dry due to the influence of a large Mormon population. The nearest bar from our border crossing at Del Bonita is nearly an hour north.

Whiskey Gap was also the name of a thriving community on the north side of the Gap. These days it has been reduced to a single, one room church alongside the highway to Cardston. Back in 1976 it briefly came back to life as the setting for the film Days of Heaven.

Never heard of it? That's probably because it was a bomb. Sure had pretty scenery, though.

Ah yes, the Milk River. My dad was a cowboy in that area for a while before the death of his father called him home to mind the Minnesota farm.

He never forgot Montana. I think he talked about it every day. It was a golden, carefree time for him (he was young and unattached).

Darlene: Montana has a way of doing that to a person. I've lived in many other places that were lovely, but none of them was here.

Very pretty scenery in deed. The kind that either captivates or scares people, depending on how urban they are.

Pat and Marcus: Yeah, all that space can be scary. For myself, I get antsy back East or in Minnesota where I'm constantly hemmed in by trees and can't see more than a hundred yards. Makes me claustrophobic. Oddly enough, cities don't have the same effect. I think it's because they're on a grid so I can maintain my sense of direction.