The Trick to It

We don't own a lot of new stuff. Farm equipment, vehicles, campers--pretty much everything has some miles on it by the time it comes into our possession, and with the miles come a few quirks. Or as we like to call it, personality. 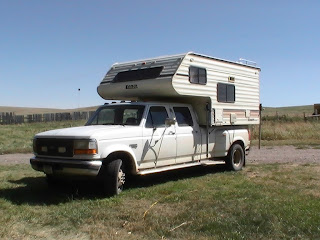 Our pickup has oodles of personality. It was born in the era when the ignition and the doors each had a designated key. For reasons known only to Ford Motor Company, the door key is the one with the black plastic casing--exactly the opposite of every other car we've owned. Even better, the door key does fit into the ignition. Thanks to my brother we know it will even start the pickup if you crank on it hard enough. After an hour of crawling around checking fuses and wires, he called to ask us the trick to getting the gages and lights to work.

Well, first you use the right key…

Then you mash the clutch clear to the floor. Or maybe stomp is a better term. As in so hard the floorboard bows out little. Only then will the ignition engage. Usually.

And there's the backup fuel tank. It has a tube that's supposed to vent air to make room for the fuel as it runs in. Except sometimes the vent tube gets vapor-locked and five gallons into the eighteen gallon tank it suddenly belches diesel, usually all over the poor slob trying to fill it up. Then it refuses to take another drop. Which means instead of thirty plus gallons, you're heading out across the wasteland of eastern Montana with half that much, praying Ingomar has installed twenty four hour CardTrol pumps since the last time you passed through.

Worse, you assume because your husband fueled up the truck at the ranch you actually have enough in the second tank to get across that stretch from Browning to Hungry Horse in January when everything between is buttoned up tight for the winter. Depending on the mood the pickup is in that day, you could be right. Or not. The trick is to check both tanks every time you climb behind the wheel.

There's more, but I think I've made my point. Of everything we own, though, the most quirky is the only one we got brand new--our child. When he was four, he spent a couple of days with my sister. On the second night she called at midnight, frantic. He was in excruciating pain, wailing that he had a headache. Should she take him to the emergency room? Oh my God, he might have meningitis. Or an aneurysm. What if he was having an aneurysm?

I told her to put him on the phone. "Where does your head hurt?" I asked.

I got my sister back on the phone and told her to take him to the bathroom. Half an hour later she called to report his mysterious illness had been, er, eliminated. She was relieved, but baffled. "How was I supposed to know a headache meant his stomach hurt?"

I told her not to feel bad. Like my poor old pickup, kid ownership should come with a manual. There is definitely a trick to it.

I love the persnickety truck. Our newest car is a 2000 Pontiac. For the first few years we owned it, sometimes it wouldn't start. The lights came on by nothing from the engine. I had more than one nice man look over the engine for loose wires or whatever they look for and nothing. Then it would magically start.
One day while waiting for my husband with nothing to read, I read the manual. It seems this year car has an anti theft feature that's shorted out. If I wait 3 minutes and try the key again, it'll start. I love technology.

OH MY GOD could I relate to your son's illness! Mine used to say his throat hurt. That was code for my thirty-second countdown until he threw up.

Here's to hoping for a long life with your persnickety truck. I've got a 15-year old minivan with 220,000 miles on it. It's quirky, too. I plan on driving it until its guts fall out in the street. Then I plan to walk away.

I enjoy your blog.

You ought to see the tractor I use. I love it and it has personality. It is an old blue Ford from early 60s. I would not trade it for a new one, but figure Cowboy would!!