The other day a friend was bragging that she'd changed her first flat tire. She was rightly proud. It's good to be self sufficient even if, like her, you're a city dweller who has access to AAA and a reliable cell phone signal. 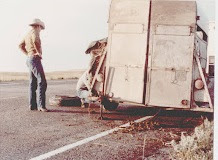 Living where we live changing your own tires is a survival skill. You could sit for hours waiting for the next stray car to pass. Growing up my sisters and I had plenty of opportunities to learn thanks to single axle horse trailers with under-sized rims and four ply tires…and a brother who was selfish enough to be the baby of the family. 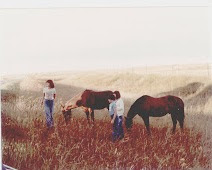 We started off as observers, invariably on the side of a highway, one of us holding a pair of horses and the other keeping track of the lug nuts while Dad tried to make like a race track pit crew so we wouldn't be late for the rodeo. In addition to developing our mechanical skills this was an excellent opportunity to expand our vocabularies, although none of my new words ever showed up on a spelling test at school, more's the pity, since they were mostly four letters and easy to sound out.

I've had two flat tires since I moved back to Montana, both on my way to work. It's one of those Murphy's Law addendums that tires only go flat when you have a specific place to be at a specific time. Double the odds if you happen to be wearing white pants on a rainy day, but if that's the case you were asking for it anyway.

The white pants were toast by the time I wrestled the dirt-caked spare from under the back bumper of the Jeep. Then I set up the little crank jack and attempted to lift the car. The jack sank into the soggy gravel road. I employed a few of my dad's favorite tire-changing words, cranked the jack down, repositioned it and cranked again. The jack sank again.

Of course I had nothing in my car to put under it to create a wider base of support, and who knew there was a place in Glacier County that doesn't have a decent-sized rock? I was sitting on the spare tire in my ruined pants practicing creative phrases of my own when a nice man pulled over to help.

I appreciate the assistance. Honest I do. Except for the part where the man in question always assumes the real problem is that I'm a girl and therefore lacking in brute strength and an inherent understanding of basic mechanical principles.

"I need a board to put under the jack so it won't sink," I said.

"Got it covered." He whipped out a slightly larger version of the same jack, shoved it under the car and cranked it up. It sank. "Need to put it on a board," he declared.

Wow. Why didn't I think of that?

The next tire was at least considerate enough to go flat on pavement and on a day I was wearing jeans. I dragged out the spare and the tools and employed my patented lug nut removal technique, which begins by positioning the wrench in such a manner that the handle is parallel to the ground. Then I jump on it. The nut didn't budge.

I tried again. Nothing. I tried the next lug nut. Then the next. It was like they were welded on. I dragged the spare tire closer and used it for a launch pad so I could jump higher. Crack! The wrench and I hit the ground. I gathered us both up and inspected the damage. The lug nut had held firm but its cute aluminum cover had split open and was now wedged inside the wrench.
I was sitting on the spare contemplating how to pry out the mangled scrap of aluminum in the absence of a pair of needle-nosed pliers when the next helpful man came along.

"The lug nuts are stuck," I said. "I broke one of the covers trying to get them off."

"No problem." He whipped out a wrench exactly like mine and gave one of the nuts a twist.

Nothing. He cranked harder. Still nothing. He reared back and put all of his weight into it. Crack! He stared at the aluminum shell wedged inside the end of his wrench. "Lug nuts are on a little tight," he declared.

Well, golly. You'd think even a girl could've figured that out.

This week over on the Songs and Stories page, a couple of tunes from my private stash. Come and meet Doc Walker and Dylan Leblanc.

There are times when no matter how willing you are to accomplish something, you just couldn’t make it. Well, you must’ve been grateful to the kind man who helped you. I can feel that the both of you really found it hard to loosen the lug nuts and you almost give up. Hehe! But still, you did it. Without each other, you wouldn’t be able to limp it. Two heads are better than one! ;) Great job!