Every year I dream up great ideas to get all crafty and homemade for Christmas. Ornaments! Stockings! Handmade necklaces for my sisters! A gingerbread replica of Many Glacier Lodge! In my head, they all turn out elegant and dreamy with a minimum of fuss.

Reality goes pretty much like this year. I hadn't bought a Christmas present until Monday, when I ordered one online. Then I hit the hardware store here in town for a toboggan and happened across a popcorn popper at the grocery store. I was on a roll.

We decided to take care of the rest in one big blast. I left work early yesterday and we drove the two hours to Great Falls and spent three hours engaged in aerobic Christmas shopping. Now we are DONE. Until approximately eleven o'clock on Christmas Eve when I will be madly shoving things into gift bags and scratching out last year's names on the tags because I forgot to buy new ones.

The kid and I have propped up our usual scrawny Christmas tree in the corner of the living room, slapped on a couple strings of lights and our hodge podge of cheesy ornaments that shrinks every year thanks to the unforgiving nature of a concrete living room floor.

However, I am proud to say that I did manage to pull off one of my planned Christmas projects, with a little help from my mother. For whatever climatological reason, this year we had a bumper crop of rose hips, so we made rose hip jelly. 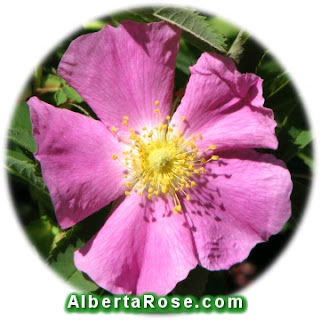 First, a little about the roses. They grow wild in our pastures, in quantities large enough that right across the border from us southern Alberta is officially known as Wild Rose Country, as you can see from the logo above. They range in color from pale pink to fuschia and have a typical rose scent. And thorns. In September, after the roses are long gone, the blooms are replaced by brilliant red hips: 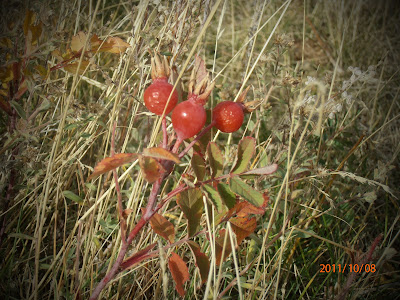 The hips are edible, consumed by everything from gophers to birds to coyotes. As you can imagine, on a prairie as devoid of shrubbery as ours is, they also attracted the attention of the indigenous tribes, and were used for medicinal and ceremonial purposes. Turns out rose hips have ten times more Vitamin C than oranges, which is why there is Rose Hip Vitamin C at your drugstore.
Here's the thing: they do not taste good. They are bitter and leave a pasty aftertaste on your tongue, which is why I had never considered harvesting them before. But we had so many this year and they were so big and bright, and I'd seen rose hip jelly in one of the Glacier National Park stores, so I decided to give it a try.
First, I dragged the kid out to the bull pasture with me and we scavenged the fence line for a nice bucket of rose hips. It was almost worth it just to see them all in the bowl. Pretty, yes? 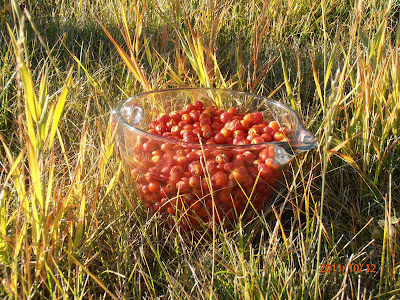 Cleaning them took the length of an entire Montana State Bobcats football game, but it was a good way to keep from chewing off my fingernails (four freaking turnovers!) so that worked out well. I found a recipe for beach rose hips from Simply Recipes, cooked up the berries as instructed, then turned the juice over to my mom, who added all the good stuff and put it in jars. Voila! 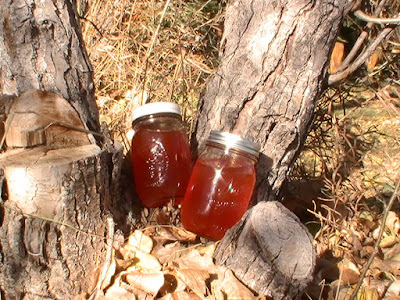 With the addition of sugar and lemon the rose hips are transformed into a very tasty jelly indeed, with a bit of a tang and a tea-like undertone. Plus, it's very pretty. We like it best on warm crepes with cream cheese. And if you believe the medicine men, it can cure the common cold, blindness and diarrhea and ward off ghosts and evil spirits. That's a lot to ask from your morning English muffin.
And of course, the best part about the hips that we harvested from right here in our pasture. One hundred percent organically fertilized. 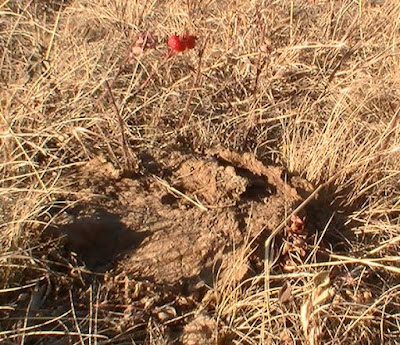 Thank you for the last picture. It cured me from asking you to mail me a jar. HAHAHAHAHA

But I've always heard of Rose Hip Jelly but I had no idea what it was, what "rose hips" were, etc.

Personally, I LOVE doing that "buy all the Christmas presents in one long, expensive shopping trip." There's something satisfying about all those sacks and the feeling of being DONE.

Mine is yummy on biscuits! It's cool to seat these photos after getting some.

The rose hip syrup is a hit on sour dough waffles and rates higher than maple syrup in my expert opinion. I have to test a bit more in comparing it to chokecherry syrup. That has long been at the top of my list and will be hard to dislodge but I'll keep testing until I founder or run out.