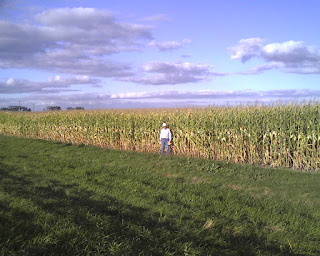 Once upon a time I lived in a magical kingdom called South Dakota, where the corn grew ten feet tall and the sunflowers were bigger than a dinner plate and the pavement ran clear to my front door. Well, within twenty yards, which is close enough. It was a mind-boggling experience for a dirt road girl. I washed my pickup and it stayed like that, all clean and shiny, and I didn’t walk around with streaks of mud on the inside of my left pantleg all spring and fall from rubbing up against the door frame. Amazing.

My husband had never lived more than half a mile off the highway, so he didn’t really grasp the sheer wonder of it all. This difference in our upbringings became apparent the first time we went to a rodeo together. I told him I was entering Bismarck and he asked if he could go along. I said sure, although there might have been a condition or two. Something about a haircut and a new pair of jeans. I bought him a new shirt myself, quite sure he would come home with one just like every other shirt he owned at the time. A bachelor should be more careful about telling his mother and four aunts that red plaid is his lucky color.

It was two hundred miles to Bismarck. The rodeo started at seven. I proposed that we leave at one-thirty, which meant I’d actually get myself into the pickup and ready to go by two.

“That’ll get us there awfully early,” he said. “It only takes three hours to drive that far.”

“Plus an hour for changing tires and fixing the trailer lights,” I said.

He gave me a blank stare. “Why would I have to fix the trailer lights? They work fine.”

“Well, sure, they do now. But by the time you get to the end of the gravel—“

And then I remembered the gravel was only twenty yards long. I may have done something like the touchdown shuffle that one guy used to do before the NFL got all cranky about showing off. Only with a lot less rhythm.

Gravel roads are brutal on trailer lights. Wires get beaten in two by rocks and yanked loose by mud clods. Plugs get packed with dust. Right up until I was in college, if asked how a weekend on the rodeo trail went I might smile and chirp, “Didn’t win a dime, but the trailer lights worked the whole way.” Any trip that didn’t include sprawling flat on your back on the side of the road with a flashlight in your teeth and dirt falling in your eyes while you wiggled wires was considered a success.

I am reminded of this because in August I hauled my sister and her broke down car home to Bozeman, then circled back through Big Timber to pick up a couple of horses. A round  trip of around eight hundred miles…seven hundred and fifty of them without trailer lights.

Three helpful hints to anyone heading that direction in a similar situation:

1. A Mini Cooper will fit in a stock trailer.

2. Thanks to the road construction around Townsend, it is actually faster to travel from Cut Bank to Bozeman via Big Timber.

3. If all else fails, spit on the light plug. It probably won’t fix the problem, but you’ll feel better. 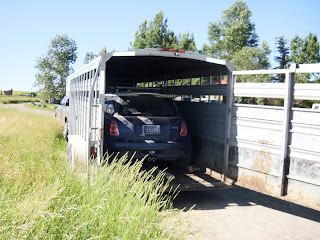 Now, that's what I call ingenuity! Both the Mini Cooper and the spitting.