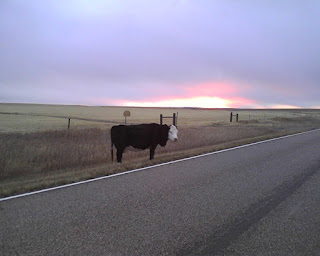 This cow is driving me crazy.
A single cow, in contrast to my normal cow-induced insanity, inflicted by whole herds. I prefer to exist in a world governed by common sense and cow behavior defies most attempts at logic. For example, if you’re standing in a pasture full of knee high grass and clear, cool running creeks, why would you jog a mile to rush through a hole in the fence to get to the neighbor’s already combined barley field, which is dry as a bone?
(And thank you, Anonymous Hunter, for that full afternoon’s extra work courtesy of the wires you cut. Your hunter friends can all thank you too, the next time a rancher blocks a road or nails up No Trespassing signs and says “No way” when they call to ask if they can hunt there. Oh, and here’s those beer cans you dropped, too.)
It is even more difficult to grasp why a dozen cows would stroll across an oat field ripe with heads too short to be picked up by the combine, ford a lovely little brook, scour the fenceline until they find that one wire flattened by the snow, hidden in three foot high timothy grass and second growth alfalfa, and hoist their big fat butts over it to get to the neighbor’s already combined wheat field. Cows don’t even like wheat.
But Lord knows, they’ll eat plenty of other things. Three hundred acres of grass, but the yearlings find it absolutely mandatory to chew up any chunk of rope or twine you leave hanging on a gate. And bones. They go after them like a dog on a…well, bone. Which is sort of creepy since the majority scattered around our pastures are cow skeletons and I prefer not to contemplate cannibalism and cows in the same sentence. Plus they usually manage to get the stupid bone stuck in their throat and then they die, but only after working up a good vet bill.
Still, the bones at least make some sense. They are made of calcium, and so is milk, so it’s sort of like a supplement. Which means they eat chunks of rusty barbed wire for the iron, right? And the electrical wiring off the hay swather for the…okay, I’m stumped on that one. I can’t think of a single dietary benefit to plastic, copper and battery acid.
So yeah, Cow Madness is not an unusual state for any rancher (as opposed to Mad Cow, which at our place is usually that high-headed brockle-face with the bad attitude). This particular cow is a special case in that she is not my cow. Or my problem. Which apparently doesn’t matter to the compulsive part of my brain that insists all cows must be kept—as much as humanly possible—in their proper place, which is not the barrow ditch.
This cow has been standing alongside the highway for two weeks straight. All by herself. Hasn’t moved more than fifty yards in either direction the whole time. Every morning and every night I drive past, sure by now either the owner has seen her or someone else has given them a call. But no. She’s still there. Every single morning. Every single night. Right across the fence from a herd of cows that appears to include her calf, since it was having breakfast through the barbed wire when I drove by on Tuesday morning.
There’s a gate right there. Wouldn’t take more than five minutes to chase her through it, even on foot. So if you know who runs cows out on the Chalk Butte highway and has blue ear and brisket tags and they don’t find their black white face cow on the side of the road, they can thank me.
I couldn’t take it any longer.
Posted by Kari Lynn Dell at 7:03 AM