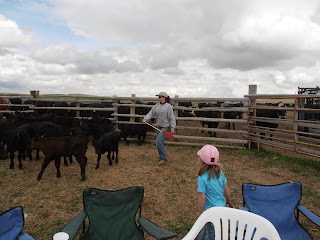 Imagine you were walking into the mall and just as you reached for the handle on the front door a pair of linebackers slammed into it from the other side and the edge of the door caught you square in the middle of the forehead, hard enough to send you flying into the nearby trash can.

Now imagine that the linebackers are1000 pound cows and the door is a sixteen foot steel gate, and you'll have a pretty good idea what happened to my mother today while they were running cows through the corral for pregnancy testing.

I got home from work and found my son watching cartoons on our living room couch. "Did grandma pick you up from the school bus?" I asked. "Yep," he said, never taking his eyes off Dora. "But she had to go to her own house because her head was bleeding too much."

I made haste to my Mom's, found her sitting at the kitchen table with a bloody towel pressed to her face. She has a two inch gash on her forehead, a big scrape and bruise on the bridge of her nose, and a swollen right calf from getting slam-dunked over the top of a steel barrel. Concerned with concussion, I asked if it knocked her out.

"Oh, no. I got right up. It was time to get Logan from the school bus."

And that, ladies and gentlemen, is why none of us has ever talked back to my mother. 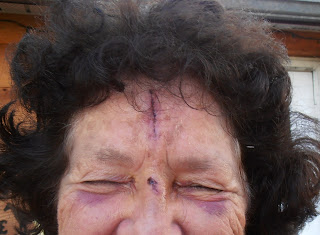 Hahaha. Tough lady! My sister's like that . . . tougher than me, that's for sure. I hope your mother's OK.

I hope she isn't too sore tomorrow, and heals up fast!

We taped her cut closed, seems to be holding fine and nobody wanted to spend all night in the ER, but she'll get it looked at tomorrow if needed. I went back to check on her about an hour ago. She asked if it was weird that she doesn't have any pain in her head.

Oh, my gosh! Your mom is one tough woman. I wouldn't have talked back to her either. What a great role model!

Holy cow! Actually, the same thing happened to me about twenty years ago with two yearling colts. I was probably twelve years old with a goose egg on my forehead almost as big as me. Luckily, I was good as new in a week or so (although I'm sure my husband would argue about any lasting mental issues). Ha! Hope she feels better soon:)