I seem to have a special knack for making work. And no, I don’t mean making ‘it’ work, or ‘things’ work. I mean the actual process of creating work for myself and others.
This is not a conscious choice. I know people who get up in the morning looking for something constructive to do. Strange creatures. I’d rather perfect my couch slouch. Given a choice, work is something I prefer to avoid in almost any form, so manufacturing more of it is never intentional. And yet, it is one of the few areas in which I appear to have a natural talent.
Take computers, for example. Better yet, take the one I use at work, all its little friends and its server, too. A couple months back, the software company did a major upgrade. In case you’ve never experienced one, let me translate. ‘Upgrade’ in layman’s terms means ‘completely, totally screw up everything you finally got to function since the last upgrade’. But I can’t blame tech support for the fact that we have to re-enter certain basic information in every account because a certain someone clicked a certain button before knowing for certain exactly what the result would be.
Oops.
Of course, when it comes to creating work a computer can’t begin to compete with your average farmer or rancher. Or even his wife. Pick up one good sized rock with a hay swather and in less than five seconds you’ve supplied two days of job security for the person who untangles chains and straightens shafts.
And then there are cows. Cows are the original make work specialists. They devote a sizeable percentage of their limited mental capacity to guaranteeing that their owners never feel un-needed. For even one single day. Otherwise, why would they push down a fence to get out of a field full of knee high grass and into a crop of canola, which appears to be the cow equivalent of eating your Brussels sprouts because they refuse to touch the stuff.
But just in a case a rancher can’t seem to drum up enough to do on his own, he can always count on his dog for help. Especially Max, because everybody knows a half grown dog is twice as good at creating work as one with a full set of brains.
My husband proved this last week when he saddled a horse to trot up and gather a couple of yearling heifers that had crawled out of their pasture. Quick, simple. Might as well take the pup along, on the off chance that a three mile jog would reduce the number of household items she chewed into plastic confetti overnight.
First off, he had to find the hole in the fence where the yearlings crawled out. Also simple, a couple of boards knocked down in a corner. While he was contemplating the best way to fix said hole, Max wandered down to examine the rest of the herd. And being yearlings and the bovine equivalent of a pack of junior high kids, they returned the favor. En masse. Twenty head of large, curious calves trying to get a sniff of her.
She backed away. They followed. She started to run. So did they. She ran faster. Ditto the yearlings. She was nothing but a black and white streak when she blew past Greg and out the hole in the fence.
And all twenty head of heifers followed.
A mere hour and half later, he got the last yearling shoved back into the pasture and finished patching the enlarged hole. And to think he would have wasted all that time on something foolish like dinner if his dog hadn’t been there to help. 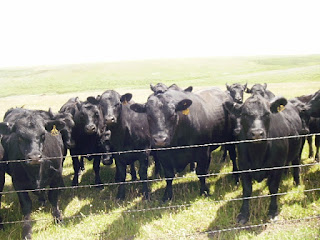 where I work, we call 'upgrades' 'upgrenades' because of how well they often work.

Hah. Upgrenades. That's awesome. Gotta share that with my coworkers.

So glad you're back to blogging!

Nice to see you back. Seems like I make work for myself sometimes too... hope you are having a nice fall there.

Dogs are the charismatic trouble makers we all wish we could be. You gotta love 'em.

I don't know who this good lookin' guy is, but he has an impressive camera.