If you haven't read Parts Two, Three and Four, you may want to backtrack or this could get confusing in spots. But probably not much more than usual.

Of all the trips to the ranch for Christmas, the last drive out from Oregon in 2006 was definitely the most memorable. My brother Marty was still living in Juneau, Alaska. Sister Gina and her family were still in Pendleton, Oregon, and my brother-in-law had returned safely from Iraq, thank the Lord.

Plane tickets from Juneau to Great Falls were still pricey, so Marty flew into the airport nearest where we lived to ride home with us. Gina and Paul decided to take the train since Amtrak runs right through Cut Bank, which was great except for the small matter of a few extra packages that wouldn’t fit in their luggage. 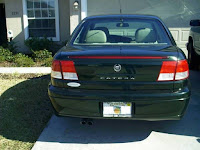 Our little black Cadillac was packed to the roof when we left Hermiston. (Yes, Cadillac. You didn't honestly think we kept that Jeep, did you?) The trunk was crammed with Christmas gifts—ours, Gina’s and Marty’s. Plus suitcases and extra winter gear (we were pretty proud of ourselves for making sure the tire chains were on the TOP of the pile). Even the back window of the car and half the floor in the backseat was packed. There was barely room for three adults and a nine month old kid in a car seat.

Luckily, my sister has a small dog.

The roads were good, the traffic polite and reasonable even in Spokane, and the kid slept a lot. So did my brother. We cruised over the first three mountain passes and were in Kalispell for lunch. Gassed up, snacks replenished, we headed east over Marias Pass—the home stretch.

Halfway across, the road narrows and winds up Bear Creek canyon toward the monument marking the spot where you cross the Continental Divide. As we started up the last steep slope, we hit a snow squall. My husband slowed down. Then he said a really bad word.

The red engine light had just come on. The thermometer had suddenly jumped up off the dial. We pulled over.

Two miles back, the sun was shining. Here, the wind was howling and it was snowing sideways. Greg pulled on his hat and gloves and ventured out to look under the hood. Then he said another bad word. The big serpentine belt that operated pretty much everything on the car--including the radiator fan--was broken. The car wasn’t going any farther.

Lucky for us, this was Montana. The first pickup that came along pulled over and asked if we needed help. Greg explained our predicament.

“They said there’s a guy in Browning named Jim Jay who has a tow truck,” Greg said, when he crawled back in the car. “They’re going to call him from the phone at the Snow Slip Inn.”

Did I mention we’d both been living away from home for quite a few years, and our memories of our relatives had sort of faded around the edges?

Jim Jay arrived sooner than we expected, given we were thirty miles from Browning. We were so happy to see him we didn’t stop to ask ourselves how he got there so quick. Jim Jay’s tow truck was actually a flatbed car hauler, mounted on a Dodge Ram pickup. When the car was winched into place and strapped down, we realized we had a small problem. Four adults, one baby, and a single cab pickup.

Greg volunteered to ride in the car. He climbed up onto the flatbed and into the driver’s seat. Marty and I and Logan got in the pickup with Jim Jay. Nobody asked the dog her preference. I held Logan on my lap, the first time he’d ever ridden in a vehicle facing forward, looking out through the windshield. In retrospect, I’m amazed we ever got him into a car again.

Jim Jay hit the gas. At that moment, I had a vivid recollection of the last time I’d driven past his shop on Main Street in Browning. In particular, the shiny purple race car parked out front.

The road was steep, winding, and had a generous coating of snow pack that turned to slush as we descended at a rate of speed that made my cheeks pucker. We skidded around curves and flew over potholes, the car swaying and bouncing up on the flatbed. Jim Jay rammed through the gears without bothering to use the clutch.

“I didn’t realize you could speed shift a Dodge,” my brother said casually. No small feat when your teeth are clenched.

“Oh, sure, if you rev it up enough,” Jim Jay said, grabbing a higher gear. “Besides, I have a hard time with clutch since I screwed up my left ankle in that last accident.”

Back in the car, Greg tightened his seatbelt. The dog dove for cover in a Christmas gift bag.

We reached Browning in less time than I could ever have imagined…or desired. When we slowed at the edge of town, I exhaled for the first time since we’d started moving. Thank God. We made it in one piece.

“No sense stopping here, there’s not a repair shop in town anymore,” Jim Jay said. “I’ll take you on to Cut Bank.” 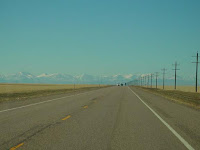 It’s thirty miles from Browning to Cut Bank. Mostly flat and mostly straight. A veritable drag strip. Ten miles out of town, the speedometer hit eighty. I knew this because I was sitting in the middle and had a much better view than I wanted. Then I saw the first road construction sign. Reduced speed ahead. Forty-five miles an hour, no passing. And there was an ancient Chevy pickup puttering along in front us. Jim Jay would have no choice but to slow down.

“Better get around this guy, he looks like one of those people who actually go forty-five,” Jim Jay said, and whipped out into the passing lane.

We barely cleared the Chevy and got back in our own lane when the shoulders of the road disappeared, whacked off by the construction crew, leaving a two foot drop on either side and forcing everyone to crowd the centerline. Except our flatbed stuck out a foot past the cab on either side. We met half a dozen cars, their drivers going wide-eyed at the sight of us bearing down on them. I’m fairly sure we left two or three spinning off into the ditch in our wake.

Then the pavement disappeared completely. The road turned to pitted gravel and frozen mud.

The speedometer dropped to seventy. Back in the car, Greg had both hands clenched on the steering wheel, braced for when the tie straps broke and they went flying off into the ditch. The dog started reciting the Lord’s Prayer.

We arrived in Cut Bank in record time and one piece…other than four sets of shattered nerves. Jim Jay slid to a stop beside the Cadillac dealership, released the tie straps and dumped the car on the street. Then he roared off before we could even ask how much we owed him. Greg staggered out of the car, green around the gills and weak in the knees.

The dog knelt to kiss the ground.

Merry Christmas. May your holidays be happy and your family entertaining. Or vice versus.
Posted by Kari Lynn Dell at 4:44 PM

Love these stories. I laughed so hard in Denver when you told this I crossed my legs...um, to be lady like.

Kari,
As one that grew up in Montana I find your talent with words similar to that of Charlie Russell's with paint. Both portray great pictures of life as we have experienced it.

Thanks for the memories!

Can't wait to read your books.