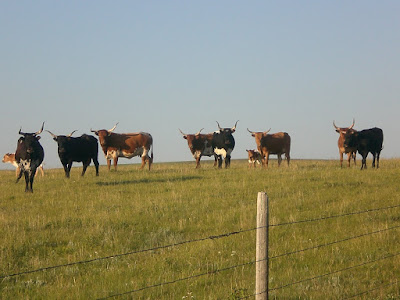 Lurker in Maryland, here. But I'm originally from the West. City-slicker West, but the grandpa I never met was a sheep herder at one point and kept quarter horses ever after that, and these stories sound a lot like the ones my dad and my uncles tell. I love 'em.

Bwhahahaha!! Excellent post. :) I can FEEL your bleeding lungs. Eee.

HAHAHA I can see the Longhorns snickering. What a great game you gave them!

OMG this is so well-written I could see what was happening clearly, and I laughed. Sorry, I actually laughed out loud at your predicament, all the while, hoping in the back of my mind that you made it out of there without getting gored by one of those longhorn's horns. (I am ignorant on such matters, not sure if those huge critters would do such a thing or not.) I prefer walking too. Which I am learning is a good thing. Jogging is hard on a person, all that jarring to the knees and other body parts takes it toll. Better to walk.

SAC--Glad you've been stopping by and that I've been able to revive some fond memories. If I run out of stories, maybe I can borrow some of yours.

Elizabeth-- The Longhorns have never attacked anyone, other than when there was a newborn calf involved, and we mostly keep our distance from those. I don't trust any of our bulls completely, though. And this particular bull has always seemed kind of grouchy, so I tend to err on the side of caution. Except when I'm being dumb, of course.

I really wish you would post everyday.. My hysterical laughing is a mini workout in itself! I like walking myself... especially if my camera is along... and my dogs... or bike riding... which is difficult to do amongst the ruts, rocks and cactus. Which is why I don't do it often, I'll put mountain bikers above joggers... they really are crazy. Endorphins??? Really. Do a couple of Miller Lites qualify instead?

Now you know that those Longhorns have a direct line to God and got him to play along with their little joke. You can't trust a Longhorn! LOL

If Longhorns have a direct line anywhere, I suspect it's to the Devil. In this case, though, all they had to do was line up along the fence and watch the show.

Alcohol in some form has to be a better option. And mountain bikers...I took my mom's bike out for a spin across the pasture the other night. There's potential for another whole blog in that trip.

Cows are a lot smarter than most people give them credit for! Great post - I have been there (chasing animals), and I also run, and I have to say the adrenaline caused by fear is a lot more powerful than an endorphine high!