My dog is not Lassie

My dog would leave me for coyote bait in a heartbeat. If, while out on one of our daily hikes, I were to step in a badger hole and break my leg, she would only come back to check on me if she thought by chance a cookie had dropped out of my pocket in the fall.

Case in point: yesterday, we were sorting cows. It's calving season, and we have a bovine birthing center in our front yard. About once a week, we go out to the main herd and try to pick the cows that look most likely to calve in the next few days. This is an art at which my father and husband excel. I suck. They just look fat to me.

Once we've chosen what we believe will be the next new mothers, we trail them half a mile home. There, they spend their nights lounging in piles of hay in the indoor arena, safe from snow and wind chill and their own poor judgement. What part of dropping your newborn in an icy mudhole seems like a good idea?

So, we were sorting off what we call 'the heavies'. After months of long, cold, snack-laden evenings, I feel as if I should be counted among them. This sorting is not an exact science. Therefore, along with those yet to calve are a handful of cows with babies at their sides, having fooled the experts and popped the kid out before arriving at the maternity ward. They tend to be very protective of their young. After all, this is coyote country. Which brings me back to my dog.

My dog sees no reason she shouldn't jump in and help us out in the corral. Cows see no difference between a Border Collie and a coyote. One particular cow took great exception to my dog's proximity to her child. She took a run at the dog. The dog ran for her life.

I happened to be standing in front of the only fifty foot stretch of fence that the dog couldn't duck under and I couldn't climb. I yelled advice to the dog, consisting of a few choice profanities, an observation on her intelligence, and the suggestion that she relocate. She responded by cowering behind my legs.

The cow took another run at the dog, apparently unconcerned with possible collateral damage to my person. I dove right. The dog dove left and through a hole in the fence. The cow slid head first into a post. The last I saw of the dog, she was topping the hill, running flat out to the house.

And no, she didn't look back to see if I was okay. 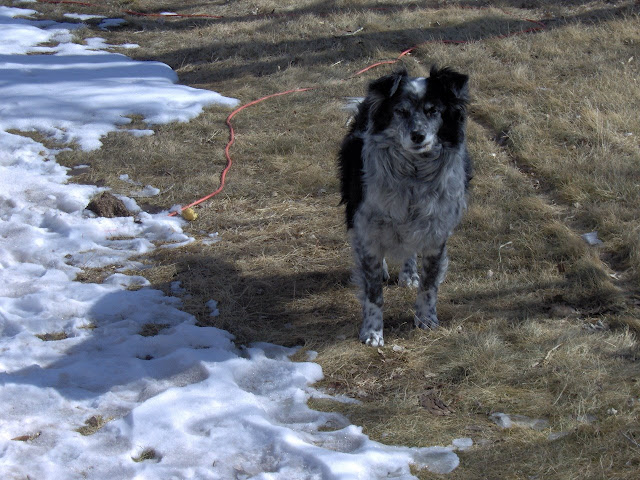 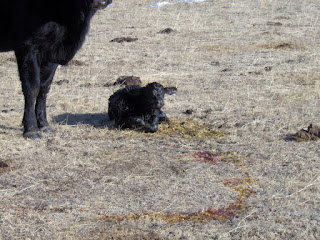 Not that I'm not concerned about you - but since you typed this, it's safe to assume you're okay - but have you found the dog yet?

Mine are just as un-Lassie-like. Puggle #1 is velociraptor smart and puggle #2 must have fallen into the water bowl a few too many times. #1 would protect me from perceived danger, #2 will cower. Neither of them can figure out what 'danger' is; case in point, a rouge trash can on the sidewalk was deemed dangerous by my duo on a walk today. #2 cowered and tripped me. #1 barked herself into a frenzy and refused to let me pass.

Dogs... you gotta love them (except for when you don't!).

Oh, not to worry. The dog was waiting impatiently on the front step, where she remained while I trotted around on foot herding the cows into the proper gate.

Boy I miss cows. Well -- at least a little. I took care of some swell Kingshires while working at a Zoo. I'm retired now and I don't miss the snow down the neck or the goats chewing on my hair but I do remember fondly the bovine warmth leaning up against me when I fed out hay in the morning.

Congrats on starting a blog. I started mine last week and It's lots of fun. I thought it would take me away from my other writing, (I am also writing a mystery, paranormal, it has talking shoes,) but it seems to give more energy to get through any blocks by switching back and forth between the book and the blog if I get stuck.

Anyhoo, see you around the blogoshere -- and best wishes.

Kari, thanks. I needed a laugh this morning. Sorry to hear about your non-Lassie dog, but I think most fall into that category.

Border Collies are sometimes too smart for their own good. (Just ask mine!) I didn't know you had one. Good to see a picture. Maggie (my BC) is 14 and still rules the roost at our house.

I think if I were a cow at your place, I'd just pretend to be pregnant to get to go to the soft hay in the warm barn. It'd be the longest pregnancy on record! LOL